Things To Expect From A Smashing Workshop: Form Design Masterclass

It took me around six months on and off to write the content for the workshop. After a lot of deliberation, I decided to structure it like I do in my book, Form Design Patterns.

It was a 4-day workshop split into two 45-minute segments, with 15-minute breaks followed by a 30-minute Q&A with optional homework between days. Each day we set out to solve one big problem. This provided a way to approach the problem like we do in real life: by analyzing and discussing the options before arriving at a good solution.

Overall, it was a fun experience. I learned a lot and had a great time teaching and chatting with everyone. I’m already looking forward to the next one which is tentatively planned for Summer 2021.

Some Of The Highlights Of Each Day

Here’s a quick rundown of each day including some of the highlights.

On the first day, we designed a simple registration form from scratch. This provided a perfect way to nail the basics of form design. It covered things like label positioning, form styling and input types. At the end of day 1, we had ourselves a registration form that covered the basics and made the form as simple as possible for users.

My highlight of this session was the question protocol exercise. Instead of focusing on how to artificially save space on forms (by using things like float labels, tooltips, left-aligned labels and placeholder text), we used a spreadsheet to help know why every question is being asked and the best way to elicit the answer. 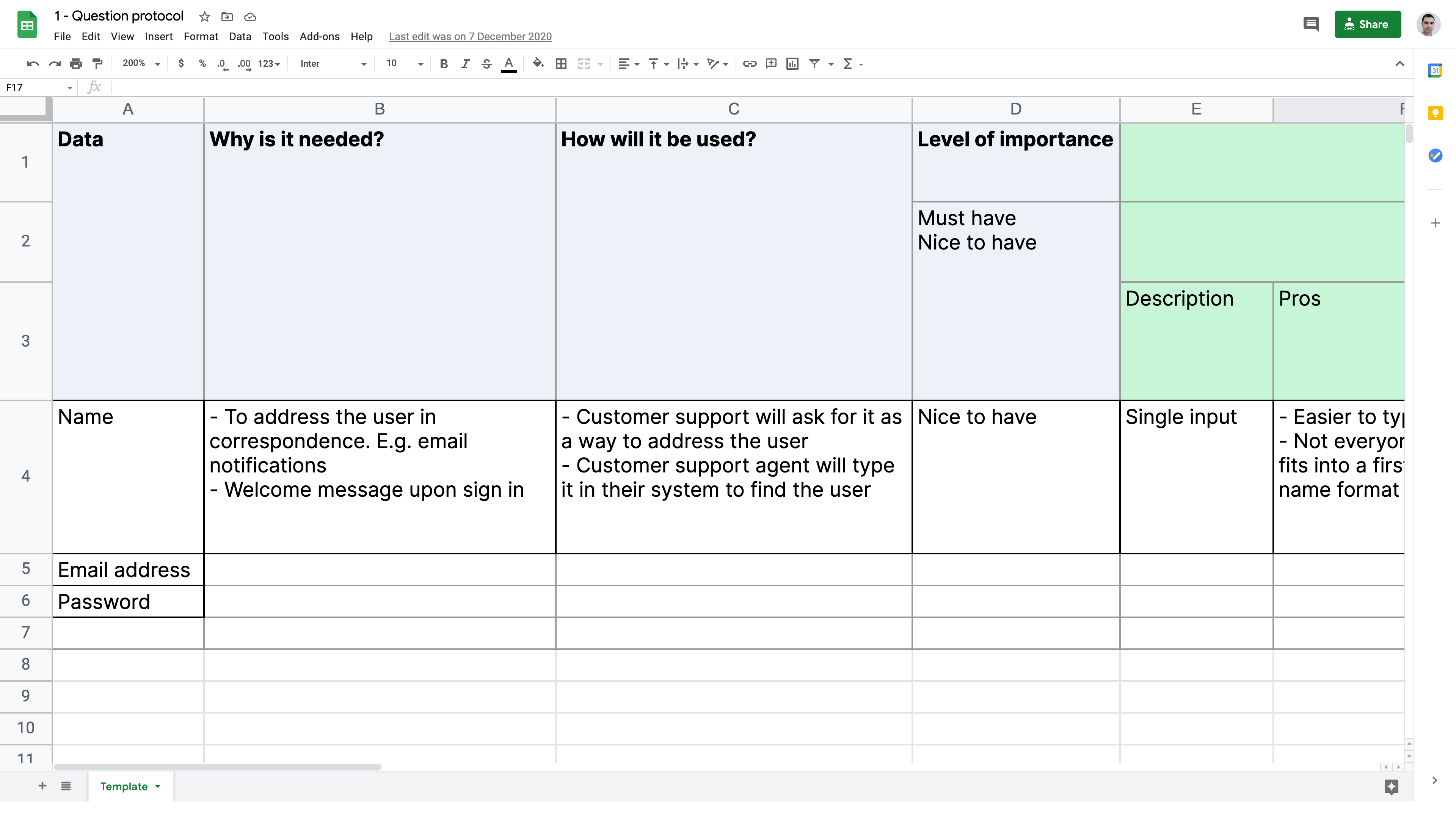 For our registration form, this meant a thorough analysis of asking for someone’s name, email address and password. And by the end of the exercise we had halved the number of form fields and had clear justification for the ones that remained. 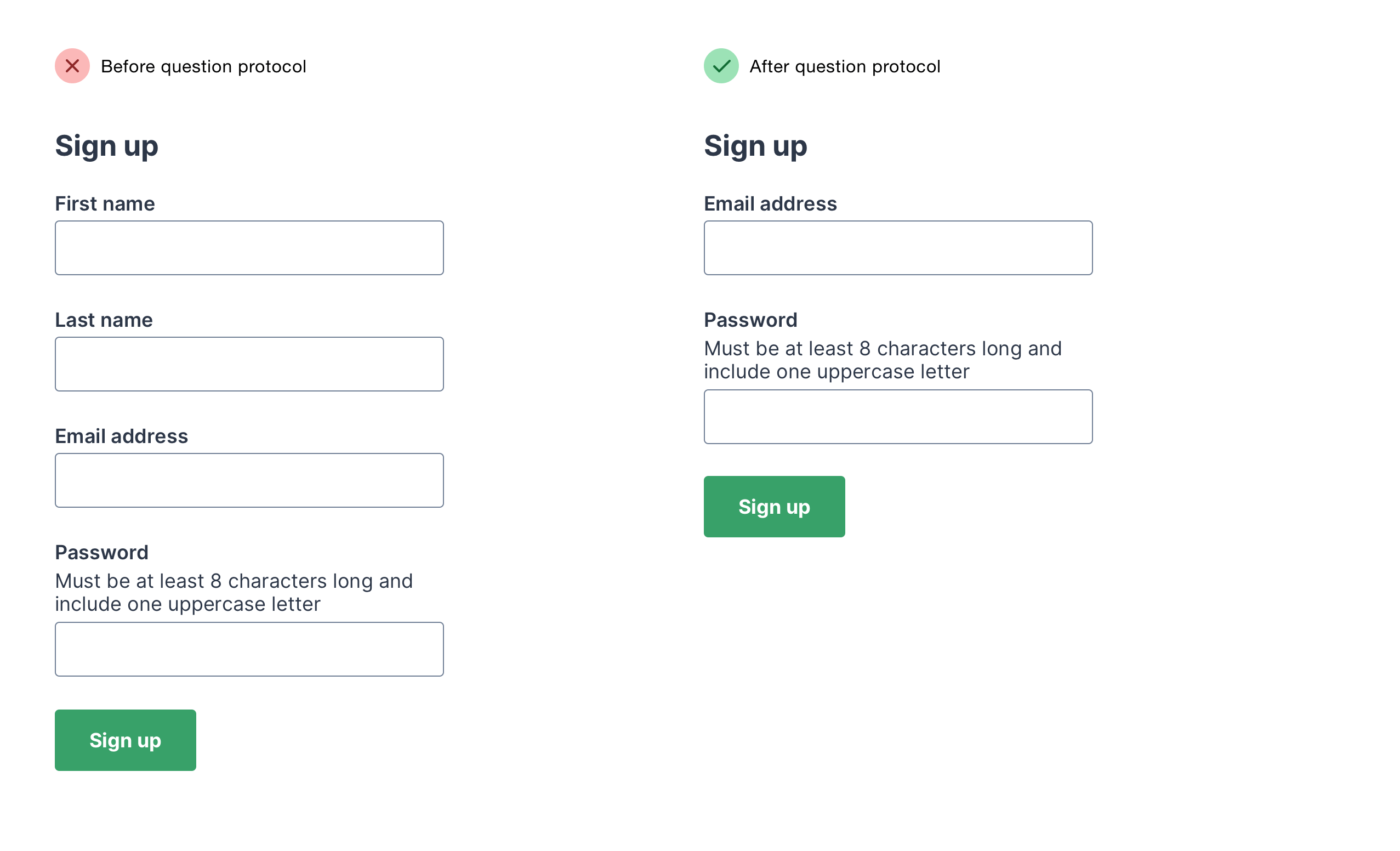 On the second day, we took our well-designed registration form and looked at how to help users recover from errors in two ways:

My highlight of this session was the exercise to redesign the error messages on Smashing Magazine’s very own membership sign up form.

Sophy Colbert, a content designer who attended the workshop, volunteered to share her new error messages explaining her rationale for each one. 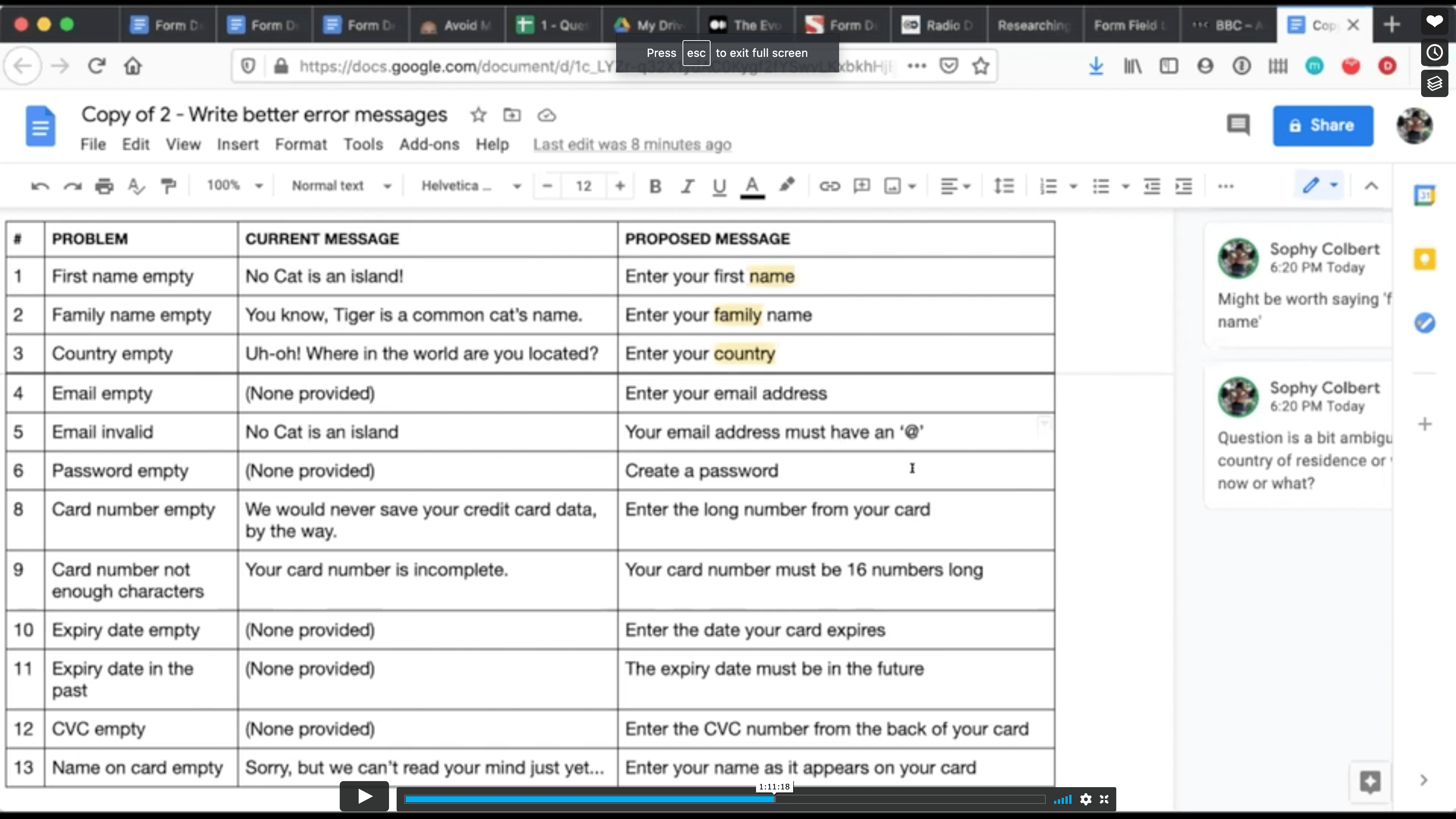 Both the messages and the rationale were superb, and I think the group got a lot out of it as they could get an insight into Sophy’s content designer mindset.

On day 3, we redesigned the ASOS checkout flow from scratch. This included guest checkout (first time experience) and checking out as someone with an account (repeat-use experience). We covered a lot of ground such as whether to use tabs, accordions or radio buttons. And we also looked at single page checkouts versus multi-page checkouts.

My highlight of this session was that the process of redesigning several interactions, exposed new content design and service design challenges. For example, we converted the tabs that ask the user to specify whether they have an account or not:

And we redesigned them into a form with radio buttons:

And this exposed the problem that in real life, choices are rarely binary. So I asked the group what the missing option was and they rightly said: ‘What if the user can’t remember?’

So even though we originally looked at this primarily as an interaction design problem, it became an issue of content and service design.

All of these problems nicely encapsulated one of the form UX rules: ‘Make friends with other departments’. As designers, we have to work effectively with stakeholders across the organisation to make sure we avoid as much complexity as possible. And this again is where the question protocol really shines.

Day 4 was split into two parts which I’ll discuss in reverse order.

In the second part, we looked at various patterns that help users fill out long and complex forms — the kind of forms that take days, weeks or even months to complete. I was really looking forward to running this because the design challenges around this are interesting and not well trodden.

My highlight of this session was that Vitaly, Mr. Smashing Magazine himself, came along to be our business stakeholder. The group asked him questions to work out why the form was designed the way it was and asking why certain questions were asked. 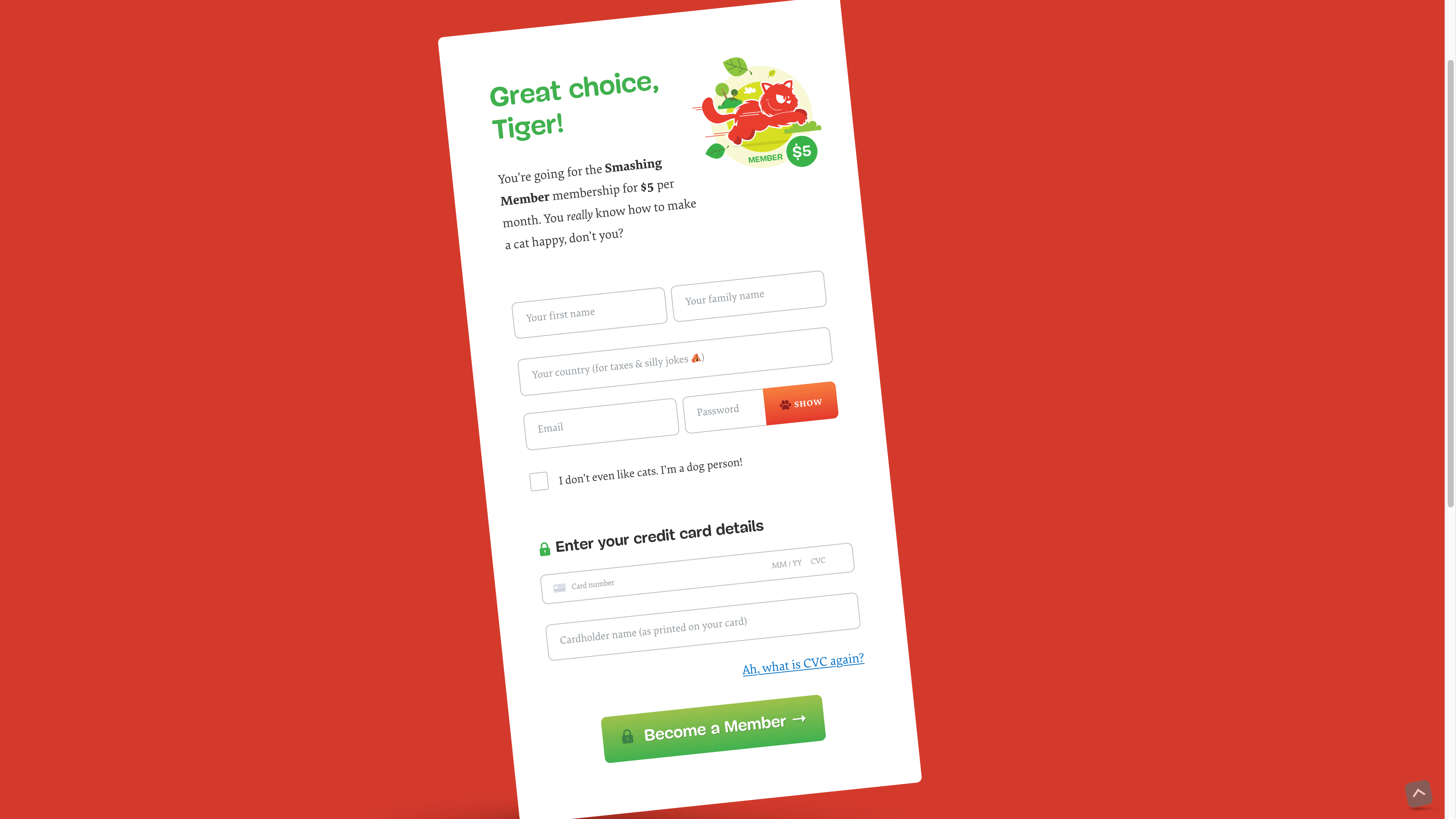 Here are a few examples:

For me, the workshop went very well overall and I was chuffed with the way things went and the feedback I received from the attendees. Everyone was so friendly, and tolerant of a couple of technical difficulties I had on the first day (thanks again, everyone!). Running the workshop remotely over Zoom has its problems (we won’t talk about how I accidentally left the meeting in a panic by accident on day 1), but actually I found the remote aspect useful on the whole.

For example, all being connected to Zoom, meant it was seamless for attendees to ask questions while sharing their screen to bring the problems to life.

I also really enjoyed meeting people across the world, something that would have been difficult with in-person workshops I think. Also, during the break, I got to quickly dash to put my kids to bed, so I imagine that also worked well for the attendees, too.

But there’s one thing I wish I knew earlier. I was worried, that with such a large group of people (81 to be exact), letting people talk freely would end up in a chaos. As a result, on day 1, I read out and answered group’s questions from the shared Google Doc during the Q&A. This meant that other people’s voices weren’t heard and there was more of a barrier between me and the group.

This is something I rectified for day 2 and it really made a difference. It was nice to hear people’s voices and thoughts in their own words and it created more of an open dialogue where other people started to answer other people’s questions which I loved.

I remember Alex Price jumping in once to talk about his experience in dealing with a complicated form that needed to be completed by different people.

What I’ll Change For Next Time

While my overall impression of the workshop was very positive, there were some things I’d look to improve for next time.

Day 1 covered a lot of the basics before going into greater detail on the following days, but it bothered me a bit to teach some of these things as I thought many attendees knew a lot of this stuff already. So next time I’d like to acknowledge that some people have come with a lot of knowledge and set the scene as ‘this is how I teach the basics’ as opposed to ‘this is how to learn the basics’ — thanks to Caroline Jarrett for this tip.

Also, I’ll probably ask the group if there’s any form design approach that they’ve struggled to convince teammates about as that’s certainly something I’ve struggled with before.

2. Split People Up In Bigger Groups

One of the exercises involved people splitting up into groups of 2 using the Zoom breakout rooms, but because people came to this workshop from all over the world, some of the people listening were not able to take part in the exercises.

For example, some people really needed to take a lunch break because their time zone was ahead of mine. This meant one or two people who did want to participate found themselves in a group on their own. Next time, I’d put people into groups of say 4 and make sure the exercises still work.

Despite the issue I just mentioned, the group exercises worked well. People enjoyed them, and it sparked some really interesting ideas from the participants. Some people messaged me after saying that they wished there were more group exercises, so I’ll aim to do just that.

A Poster Of All The Rules

As we moved through the workshop, we ticked off over 40 rules and principles of form design which brought a nice additional structure to the sessions.

A few of the attendees asked me if I had a poster of all the rules and I didn’t — so now I’ve made one. 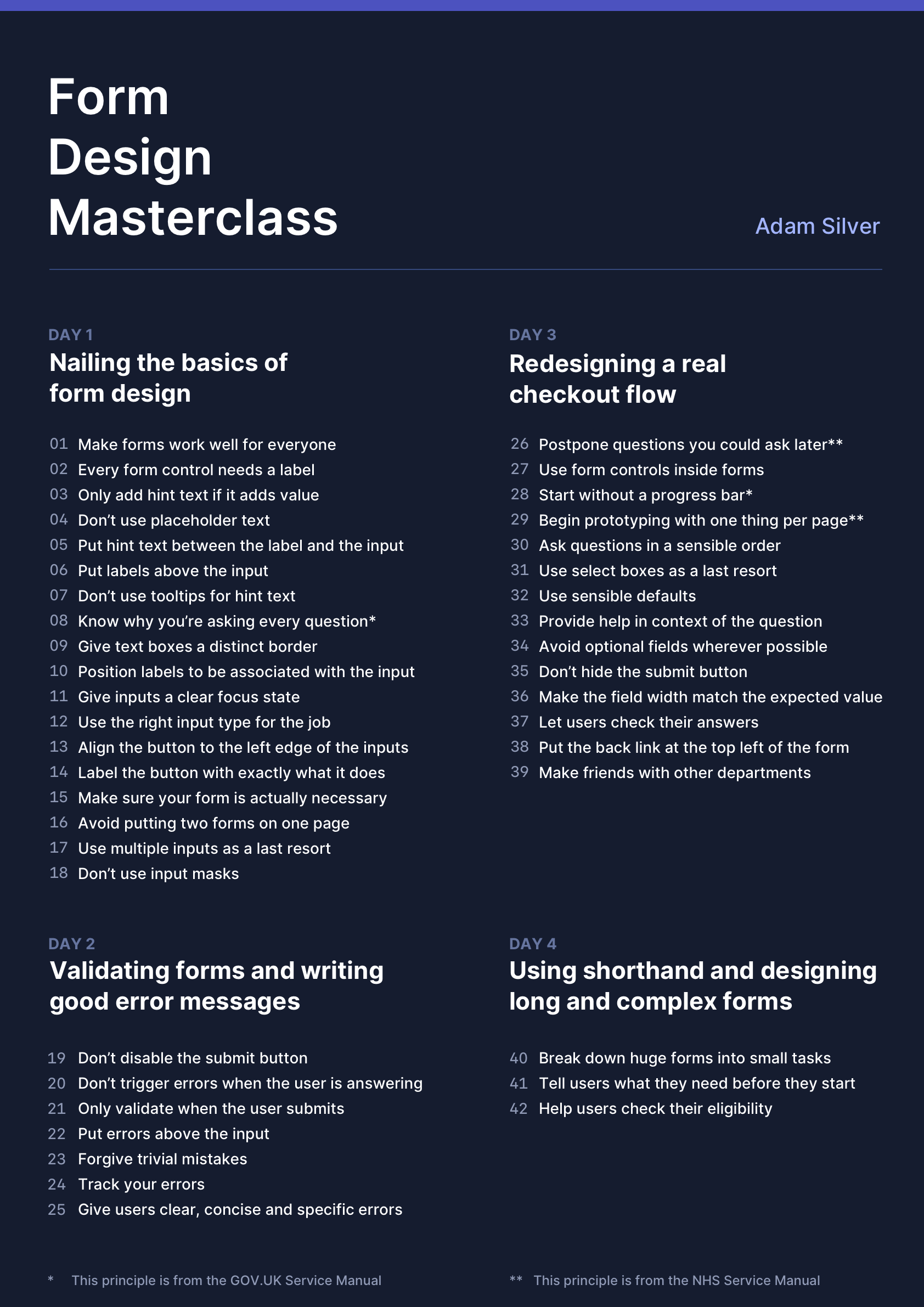 Thanks again to everyone who came for all their contributions. I’m looking forward to the next one.

Thanks to Caroline Jarrett for not only reviewing every detail of my workshop but for also editing this article.

You can also check a detailed overview of How We Run Smashing Online Workshops, and if you are interested in attending one, we have plenty of online workshops on front-end & UX coming up soon. We’d love to see you there! 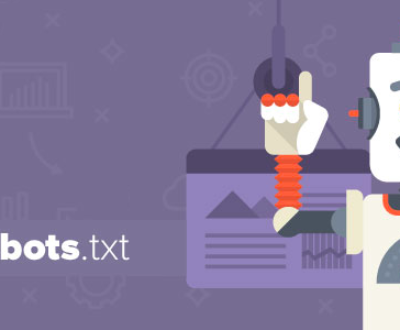 How to Optimize Your WordPress Robots.txt for SEO 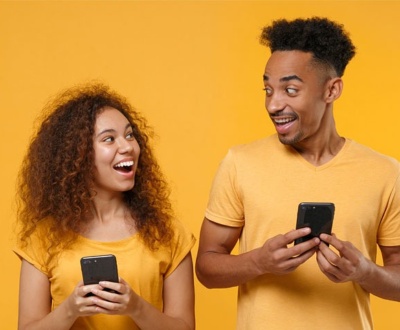 Not sure about you, but I often wonder how to build a…
Continue reading 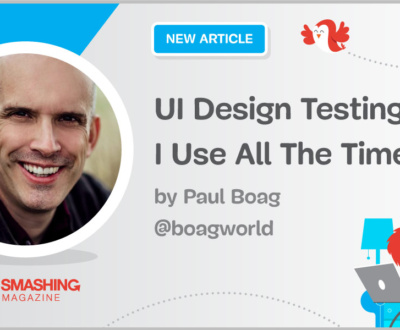 UI Design Testing Tools I Use All The Time

When I started in web design 27 years ago, testing with users…
Continue reading

Are you looking for the best auction plugins for WordPress? An auction…
Continue reading

Through the pipeline: An exploration of front-end bundlers In this week’s news, Chrome tackles focus rings, we learn how to…
Continue reading
Prev. Post
All Posts
Next Post
No Comments