How to Prevent Invalid AdSense Clicks in WordPress (Step by Step)

Do you want to learn how to prevent invalid AdSense clicks in WordPress?

Invalid AdSense clicks are the result of clicks and impressions that are typically generated by bots or spammers. High number of invalid clicks can get your AdSense account suspended.

In this article, we’ll show you how to prevent invalid AdSense clicks in WordPress, so you can keep your account in good standing. 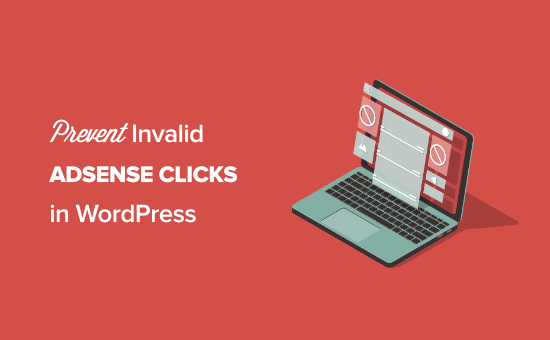 What are Invalid Adsense Clicks?

Invalid AdSense clicks are any clicks to your ads that occur from invalid traffic.

What does Google consider invalid traffic?

If you’re getting real people viewing and clicking your ads, then you’re fine.

But, sometimes, you’ll have traffic coming to your website from low-quality sources. One form of this is bot traffic that clicks on display ads.

Yes, Google has a very sophisticated platform that will automatically detect all invalid clicks.

Usually, Google will not take action against accounts unless high levels of invalid traffic and clicks have occurred.

Having small amounts of bot and crawler traffic, double ad clicks, and other errors are common, so they tend to ignore it.

However, Google will automatically adjust your account earnings to take out bot traffic and fake clicks. These adjustments happen both in real-time and at the end of the month.

The best way to avoid an account penalty is to stop invalid traffic from reaching your site in the first place. You can report invalid clicks to the Google Adsense team, but this doesn’t free your account from the responsibility.

How to Protect AdSense from Invalid Clicks in WordPress

Invalid clicks are a threat to your WordPress blog and ability to make money online, especially if it’s an ongoing problem.

There are three things you can do to help keep your Google AdSense account in good standing:

The root problem of invalid AdSense clicks is your traffic.

As a WordPress website owner, you are responsible for the traffic your website receives. That’s why it’s extremely important to understand how people find and use your website.

The easiest way to monitor your website traffic and analytics is with MonsterInsights. It’s the best analytics solution for WordPress and is used by over 2 million website owners like you.

There’s also a free version of MonsterInsights that gives you access to your most important analytics data.

For more details, see our guide on how to install Google Analytics in WordPress.

Once you’ve set up the plugin, you can view your Google Analytics reports within your WordPress dashboard. Simply go to Insights » Reports to get a quick overview of your traffic. 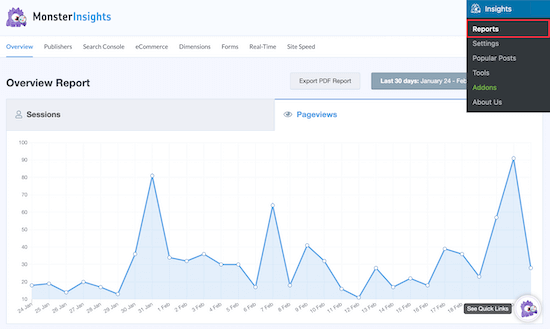 You can compare your Google Analytics and Google AdSense data to see if any traffic sources are the cause of invalid clicks.

You could be getting invalid clicks from your visitors accidentally clicking on ads.

Suppose your ads are too similar to the rest of your content, or your ads are in positions that make your site hard to use. In that case, your visitors could be clicking on your ads by mistake.

For example, if you have an ad directly below a drop-down menu, this could cause visitors to click that ad on accident.

Another common mistake is using ad units that look like your content and navigation links. If a user clicks the ad, thinking they’re navigating around your website, this could lead to accidental clicks.

For more details on AdSense ad placement, see our step by step guide on how to optimize your AdSense revenue in WordPress.

If your ads are correctly set up, but you’re still getting a warning from Google, then you’ll want to block invalid traffic sources with a WordPress plugin.

To do this, we recommend using the AdSense Invalid Click Protector plugin. It’s highly customizable so that you can block traffic and users according to your needs.

With this plugin, you can block entire countries, set a maximum number of ad clicks per user, block visitors when they hit your ad limit, block IP addresses, and more.

The first thing you’ll need to do is install the AdSense Invalid Click Protector plugin. For more details on installing a plugin, see our step by step guide on how to install a WordPress plugin.

After the plugin is installed and activated, you’ll have a new navigation option in your WordPress dashboard called ‘AdSense Invalid Click Protector’.

Next, you’ll need to configure the plugin settings. To do this, navigate to Adsense Invalid Click Protector » General Settings. 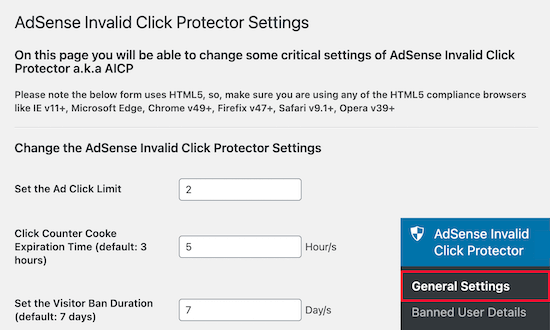 On this screen, you’ll set the conditions for the kind of behavior and traffic you want to block.

We’re going to set the ‘Ad Click Limit’ to 2, so a visitor can only click on an ad twice before it stops displaying.

Next, we’ll set the ‘Click Counter Cookie Expiration Time’ to 5 hours. This means that after 5 hours, your ads will display again for that user.

After that, we’ll leave the ‘Visitor Ban Duration’ at the default 7 days. This will stop your ads from being shown to banned visitors for 7 days.

Make sure to click ‘Save Changes’ before exiting the screen.

After you’ve set up your block settings, you’ll need to add the plugin code to your existing AdSense ad units.

Where you add the code depends on how you’ve added your Google AdSense code to WordPress.

If you manually added your AdSense code to WordPress, then you’ll need to locate every instance of the code across your site.

If you’re using a plugin to manage your ads, then navigate to the plugin and open up your AdSense code block. It’ll look similar to the code below.

Once you’ve done that, you’ll need to add the following code before your AdSense ad code block:

Then, wrap your ad code in a simple div tag:

Your final ad code will look something like this:

After you add the plugin code to your Google AdSense ads, your ads will display based on the block settings you assigned earlier.

If you prefer a hands-off solution, then there is a premium plugin called WP Advanced Ads Pro that has click fraud protection built-in.

You can enable click fraud protection directly from the plugin settings. There is no additional code you need to add to your site.

We hoped this article helped you prevent invalid AdSense clicks in WordPress. You may also want to see our collection of the best WordPress ad management plugins and solutions, and our expert pick of 24 must have WordPress plugins for businesses.

The post How to Prevent Invalid AdSense Clicks in WordPress (Step by Step) appeared first on WPBeginner.

Generating (and Solving!) Sudokus in CSS

I love to make CSS do stuff it shouldn’t. It’s the type…
Continue reading

This is a tremendous CSS-focused tutorial from Adam Argyle. I really like…
Continue reading

Your website is a product of your hard work and passion. Therefore,…
Continue reading

I‘m not sure how this one came about. But, it‘s a story.…
Continue reading

If you’re a front-end developer, you may have come across horizontal scrollbar…
Continue reading

How to Optimize Core Web Vitals for WordPress (Ultimate Guide)

How to Easily Use QR Codes with WordPress (for free!)

QR codes have been around a while now, and they don’t seem…
Continue reading
Prev. Post
All Posts
Next Post
No Comments